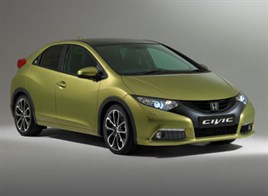 Honda will be a month late launching its new UK-built Civic which now isn't expected to go on sale until early February.

The floods in Thailand are the latest natural catastrophe to hit the car industry's supply chain. In Honda's case, the floods have delayed the production and delivery of several small components leading to a 50% cut in production at its Swindon factory.

The situation is being monitored daily, says Honda. Dealers are still on schedule to receive their demonstrators in December.

Honda UK managing director Dave Hodgetts is philosophical about it. The earthquake and tsunami in Japan in March had already cost him around 10,000 sales in the UK with two months of lost output.

But he is buoyed by October's sales performance. With supply returning to something like normal, Honda UK had its best month for some time taking a 3.6% share of the market. "It was our best retail result and highest market share for some years," he explained.

Even so the year will end with sales of around 54,000, "a low point for Honda in the UK," said Hodgetts.

By then, the present six-strong model line-up will have grown to 10 with a performance version of the Civic and an estate. New CR-V arrives in less than a year, too. It will be shown at Geneva in March.

About the same time, a new 1.6-litre diesel engine will debut offering sub 100g/km CO2 emissions. This is part of a new family of petrol and diesel engines that will be used across most of the current range.