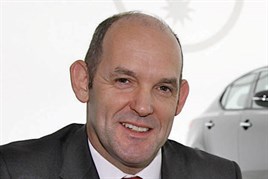 Michael Cole was 19 and working as an accountant in Doncaster. He didn’t like it.

Then came his meeting-a-man-in-a-pub moment.

The man was finance director of Godfrey Davis and he was planning to take on some trainees. Cole joined up.

At 21 he was tempted away from the car business and started working for an electrical conduit manufacturer.

“I think it was about three hours before I asked myself: What have I done?”

The shock was so profound that every moment of business life back in the car sector since then has been a joy. He restarted the relationship through a Swan Motors Ford dealer.

“I really enjoyed the dealer world because you are right at the front end of the business. You are what you make it. I remember going on a time-management course which proposed that we should always write down on a Monday night what we were going to get done on Tuesday morning. Without fail it was completely wrong.”

“We were doing one-to-one new-to-used in those days, and absorbed the overhead by 130%. There was nothing consistent about it.

"It was a totally dynamic business run by a bloke called Freddy Wall. He never owned it but ran it as if he did and was a great operator.”

Lex sold the business and Cole decided to look for a job with an importer.

“A job with Toyota came up and I joined on the day that they launched the RAV4. That was a very exciting time.”

Then came a very rapid succession of jobs. He was about to go back to Toyota for a position in Europe but the job running Kia came up and he took it.

“The market mind-set on Kia is still that it is just a cheap car. But it’s not. New product is at the forefront.

Last year it was Sorrento and Venga. We have the all new Sportage and Picanto. Now it’s the Rio. We’ve landed five models in 18 months. We have the Optima coming and new Cee’d in 2012.

“They are pretty radical steps com-pared with where we have come from. Sportage has already attracted new people to the brand. It’s a car people are happy to have on the drive instead of the habitual Audi or BMW.

“That never happened to us two years ago.”

“Our growth is corporate; not fleet. We intend to keep the business below the scale of our retail operation.”

The momentum of the business is great for staff contentedness.

“We are a very happy ship. We get happiness scores that are the best in Europe. People are proud of the brand and because we are growing, we are going to need more people.”

More dealers too; in the same period the network has expanded from 143 to 166 as a result of filling open points.

The target is 175 dealers by the end of next year. Key targets are Croydon, West London and Reading. Sunderland was filled last month.