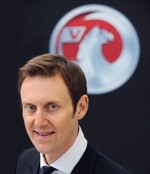 Duncan Alred, managing director of Vauxhall Motors, will also take on the position of chairman from January 1, 2012 as Bill Parfitt moves to a new role.

Parfitt will move from his current position as chairman to become Vauxhall’s director for Government affairs and public policy.

Aldred will oversee all Vauxhall operations, including the company’s HR function and personnel in the UK plants at Ellesmere Port and Luton.

Parfitt will pursue his key role as government liaison and as negotiator and supporter of growth in the UK supply chain.

During his tenure, Parfitt has led the company to many victories including the recent allocation of the next generation Vivaro which starts production in 2014 at Vauxhall’s Luton plant.

In recognition of his achievements, Bill was awarded a CBE in the Queen’s Birthday Honours in June this year followed by the Welsh Motoring Writers’ 2011 Automotive Achievement Award last month. He has also been nominated Patron of the Welsh Automotive Forum.