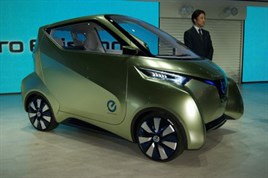 Nissan plans to build a small urban electric car similar to the Pivo 3 unveiled at the Tokyo Motor Show 2011, but admits there will have to be substantial changes before it can make it into production.

Although this third model in the Pivo series is far more realistic than its cartoon-like predecessors, with fully enclosed wheels and a fixed rather than a rotating passenger cell, it has been designed to accommodate three people within an overall length of just 2.8 metres, which means it is unable to meet any crash-test requirements.

"It will not be produced in this size. The regulations must be take into consideration in any production model," says the company's chief creative officer, Shiro Nakamura. Cost is the other big issue that will have to be resolved. "These are the two big challenges," Nakamura admits. "We are going to have to start working on them from now and it may take a few more years." This is the final model in the concept car series, which began in 2005. "The next model you see will be close to mass production," says Nakamura.

There is a strong desire within Nissan to see something like Pivo in showrooms, particularly as electric cars allow much greater design freedom than those with internal combustion engines, which require cooling systems in the front end. Batteries and electric motors can be housed anywhere.

Things that are almost certain to stay in any production model are the in-wheel electric motors and the four-wheel drive and four-wheel steering which allow for an incredibly small turning circle.

The autonomous parking and self-charging systems of the concept car will be ditched for production, though, and Nakamura says there will be consultation with study groups as to whether the three-seat layout, which puts the driver central ahead of the passengers, would be acceptable to potential buyers.