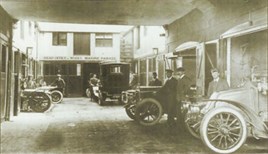 Dealers, to some extent, are inextricably linked with the fortunes and misfortunes of the brands they represent.

No more so than the UK’s first ever Ford dealer Hendy.

A century after its founding, the Hendy Group, which has sold more than 400,000 cars and has carried out more than
three million services.

It employs around 700 people at 21 dealerships and has a turnover of £250m. It remains both buoyant and in the family.

However, it was his son Percy, the youngest of six children, whose meeting in November 1910 with Henry Ford sowed the seeds of a relationship with the brand that was to become the UK’s most popular make of car when he signed the contract to become the country’s first ‘official’ dealer.

“I think both Frederick and Percy would be extremely proud at what we have become and the fact that it remains a family business,” said Paul.

He added: “We have always prided ourselves on our customer service, our ability to identify and grasp opportunities while remaining risk averse.

"We have always been prepared to plough back our profits to keep the business strong.

"We take a long-term view and we look after our employees and our suppliers, be they manufacturers or local businesses.

All our relationships stretch back years – Ford is obviously the longest at 100 years, but we have held the Iveco franchise for 35 years and our partnership with Honda is in its 15th year.

“All generations have faced adversity in business and it’s difficult to draw comparisons.

"It’s a constant challenge to keep evolving and moving with the times, but that has kept us in business for so long and we never get to the stage where we think we’ve cracked it.

"The immediate challenge is to consolidate our position and take up sensible opportunities that may come our way.”

While the Hendy name remains synonymous with the Ford brand, including trucks, all along the south coast, the group has expanded into other franchises, including Kia, Mazda and Honda as well as Iveco Trucks and has spread its geographical representation further west to Devon and Cornwall.

The group has also established extremely successful subsidiaries, including Hendy Rental and Hendy Power, formed in 1968 to supply engines, major ass-emblies and original equipment components to the specialist vehicle and manufacturing industries.

Hendy Ford played a central part in Ford’s centenary celebrations which included a heritage day at its Eastleigh showroom and attending the Goodwood Revival Meeting where Ford displayed 100 cars, including several models from the Hendy Group’s own collection.