Ford has lost its UK crown to the VW Group. Although Ford UK is still ahead of the VW brand, when you add together all the badges that appear on its shared platforms, the group now crushes the long-standing UK market leader.

Last year, the protagonists were less than 1% apart with Ford selling 316,369 cars and VW selling 319,549 cars through its four volume brands.

This year the margin is far more substantial. While Ford has dropped sales in order to restore profit, VW has continued to press for market share.

The margin is now 68,000 cars. If you add in VW’s premium divisions of Porsche and Bentley, the total goes up another 7,777. 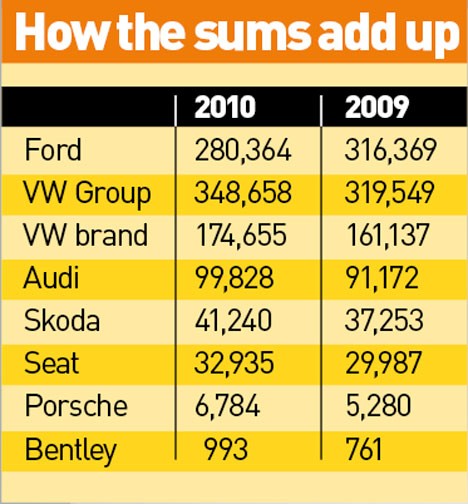 While Ford has shorn itself of subsidiary brands, VW has gone in the reverse direction with a multi-brand strategy across all markets. It has a stated ambition of becoming the world’s largest carmaker.

Its brand tally is seven: Volkswagen, Audi, Bentley, Lamborghini, Seat, Skoda and the recently acquired Porsche. VW has recently taken 20% of Suzuki which is disproportionately successful in the Indian market. And, like most people, it has flirted with a stake in Malaysia’s Proton.

Under the error-strewn leadership of Bill Ford, Ford acquired an empire that predated - and looked very like - the organisation that VW now has.

Ford’s ownership of Aston Martin, Jaguar, Land Rover and Volvo was unscrambled by Alan Mulally when he took over. He coined the mantra ‘One Ford’ and forced the US enterprise to concentrate on strengthening the core business.

It’s working. Thanks to dogged concentration on the task of taking perception of Ford quality to within sight of the premium brands, worldwide sales and profits are up.

In the US market, Ford is second to General Motors, having swept past Toyota to get there.

Ford US benefited to a considerable extent from a good run of new models, but also by not holding out the begging bowl to the US taxpayer – unlike Chrysler and GM. Its other gamble was to mortgage all the factories which gave it enough money to ride out recession while the competitors went cap in hand. Ford’s in-house market analysts described 2010 as one of their best-ever sales years.

Nevertheless, it remains a discount brand – a habit that it is trying hard to kick in the UK. It managed to shrink average discounts by 5% in the US last year while Toyota jacked up its discounts by 30%. Nevertheless, Toyota’s average money-off is only $2,000 while Ford typically still offers a cut of $3,000.

In Europe, VW dominates Ford and sells double its numbers. In the nine months to end September 2010 VW sold nearly 2.4 million cars. Ford comes in at 1.2m which is level with Renault and a bit behind Peugeot Citroën. Toyota is well off the pace with almost exactly half a million sales (all figures to end September).

The split of the badges in the VW Group in Europe (defined by ACEA, the SMMT of Europe, as 27 EC countries plus EFTA) shows that the VW brand (1.3m sales) is just ahead of the Ford brand (1.2m) for the nine months.

If you have a stated intention to be the world’s largest carmaker, it’s not a bad idea to target the market leader in all the important sales territories. Thus the start of the VW assault on Ford in the UK. Ask VW GB officially, though, whether the guns are trained on Ford and the issue is dodged.

Rightly or wrongly, VW has a better reputation for reliability and build quality than Ford and it trades well on this. Residual values are stronger and therefore wholelife ownership costs are lower. As a result, there is a virtuous circle in the leased fleets: drivers think they are getting an upmarket brand and the employers get a lower wholelife lease cost.

Autotrader, Britain’s most heavily-trafficked website, used to see BMW as the most searched-for brand with VW second, Audi third and Ford in fourth.
But last year the improvements in Ford’s design and styling led to greater curiosity, and Ford jumped back past Audi and VW. Sales have yet to move in sympathy. VW sales were well up in 2010. Ford was down.

Ford still has strong self-belief in the UK and has been enjoying its capacity to increase prices. The slap from VW has come as a bit of a shock. Suddenly entry-level Golf is cheaper than entry-level Focus. A Golf can be taken home for £13,000. The Focus is an extra £2,000.

VW gives heavy emphasis to its reputation for reliability and cost-of-ownership superiority by offering new cars with a three-year service pack costing a mere £250.

On Motorpoint, one of the price-leaders for nearly-new cars, the positioning is a £2,000 distinction between Focus and Golf of similar specification with the Volkswagen carrying the bigger sticker.

VW says it came into the new year with 41,000 unfulfilled orders with the ranked list being Golf, Polo, Passat and Tiguan. The UK had built its forecast around recession and therefore did not place heavy factory orders.

VW brand is lucky with its run of new models. Launches for new Beetle, Touareg, Passat and EOS are imminent. And there are more efficient engines coming that will enable BlueMotion high efficiency models to both deliver at under 100gm/km.

And if none of that brings the Ford buyer over to Volkswagen, the VW Group has a double-headed reserve strategy to introduce customers to the cheap Seat or the even cheaper Skoda on the same platform. Seat starts with its eye-catching, VAT-free deal which is now the equivalent of a 20% discount for starters. It can drum up an Ibiza for £8,145. “Bit down-market for you sir? Why not have a look at the Audi deals?