Mini has emerged as the fastest moving brand in a survey of the 20 most popular automotive manufacturers online.

Jaguar also broke into the top 20, edging out Mitsubishi from the the second Experian Hitwise UK Automotive Brand Index.

Using UK internet search data, the index ranks the top manufacturers by searches for both brand and the top models produced by that manufacturer.

Ford remained the most searched for automotive brand this quarter, but only by the narrowest of margins.

Volkswagen's strong performance brought the German manufacturer to within 0.08% of Ford for total automotive branded searches.

Between April 2011 and June 2011 Mini climbed four places in the index to become the eighth most searched for automotive brand in the UK.

Mini has also made significant gains in the last 12 months rising from 13th position in the same quarter last year.

Jaguar has also had a good year, rising two places since last quarter to break into the top 20 brands and improving on its position from last year by four places. 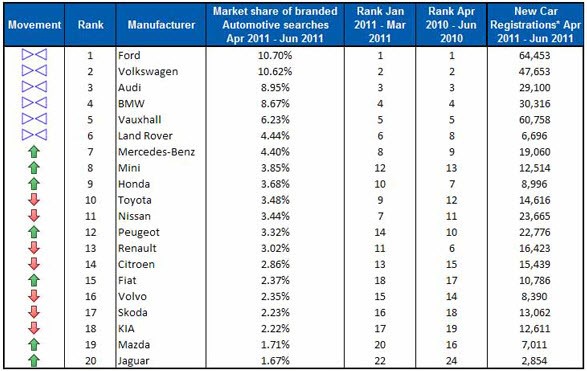 Robin Goad, director of research at Experian Hitwise, said: “Both Mini and Jaguar have had a strong quarter to see them climb in our automotive brand index, and it is integrated online and offline marketing campaigns that are driving increased search behaviour for these top brands and models.

"In the last quarter we said that the competition at the top of the Index was getting extremely fierce and today’s index demonstrates just how tight the margins are between the top brands.

"The difference between first and fourth in the index is now just over two per cent of branded searches, and Ford is very close to being overtaken by Volkswagen.

"Understanding how to maximise the online potential of brands is incredibly powerful and, as the SMMT data shows, can have a real impact on sales and new registrations.”