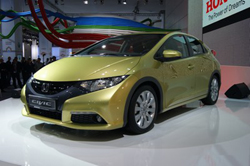 Honda dealers are being turned on to technology to help sell the new Civic.

Each retailer is getting at least two Motorola Xoom tablet PCs, complete with a pre-installed app that uses so-called ‘augmented reality’ technology.

Martin Moll, Honda UK’s head of marketing, explained: “We have funded one and they are funding a second Xoom. They will be mounted on a stand but can also be detached so the customer can hold one up to the new Civic and see things happening to the car on screen.”

Once activated, the app works with the Xoom’s built-in video camera and special stickers attached to the Civic.

"When filmed the stickers bring up information on key elements of the car, which the customer can then read on the tablet.

“It’s been developed as a way of engaging with the customer that’s more fun than looking at brochures, and it acts as a ‘silent salesman’ in the dealership,” said Moll.

“The dealers are very excited about it.”

Honda said it will also use the technology for future model launches, such as the new CR-V that’s due next autumn.

AM Poll
What is your take on the car retail sector's ongoing vehicle supply shortages? Please leave a comment
Vote
View all
3424