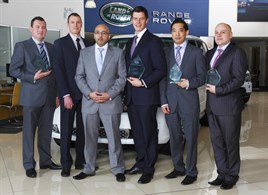 Farnell Land Rover in Bradford has taken the top award at the annual Land Rover dealer conference and awards ceremony.

The Kings Road dealership – part of The Co-operative Motor Group - beat more than 130 approved Land Rover dealerships across the UK to be awarded ‘Dealer of the Year’ by the vehicle manufacturer.

Bradford’s Farnell dealership was one of the very first Land Rover dealerships in the world, and invested £1 million in its new showroom prior to its re-opening in January 2011.

“It is also particularly gratifying since I am Bradford born and bred and very proud of my hometown. It was great to be able to promote Bradford on the national stage as a successful place to do business.

“The awards cap a great year for Farnell, which reported strong sales for Christmas 2011: new like-for-like car purchases were up 60% for the period.”

The results were driven by demand for the recently unveiled Range Rover Evoque.

Aujla said sales have also been “extremely positive” in other areas of the Farnell dealerships, with turnover in aftersales and parts up 18%, and turnover in the provision of finance up 13%.