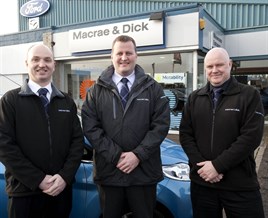 Macrae & Dick Ford in Elgin has put a new management team in place to lead the showroom in 2012.

Together the team have over fifty years of experience in the motor trade.

MacDonald first joined Macrae & Dick as a salesman 20 years ago, from where he went on to work at a number of local car dealers as sales and general manager before returning to Macrae & Dick in Elgin.

Anderson started as a technician in the Ford Inverness workshop in 2002 before gaining master technician status and a promotion to service manager in Elgin.

"They have all managed to progress their careers at Macrae & Dick through their commitment and hard work and by delivering an excellent level of customer care. I am looking forward to them providing a great service to our customers in Moray."