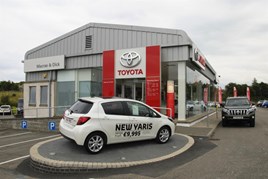 Park’s of Hamilton (Holdings) Ltd announced the acquisition of Macrae and Dick, the long-established and renowned Scottish motor group – adding 12 dealerships to its portfolio.

The Macrae and Dick acquisition increases Park’s representation of BMW, Jaguar, Land Rover and Honda while introducing new partnerships with Ford, Mazda and Toyota and taking its number of franchise partners to 23.

Park’s, who are supported by the Bank of Scotland in its new venture, see this purchase as a perfect fit, both culturally and geographically.

The deal secures Park’s new locations in Stirling, Perth, Inverness, Elgin and Aberdeen which will run alongside its current locations in Ayrshire, Lanarkshire, Glasgow, West Lothian and Fife.

Director Graeme Park said: “We are thrilled to bring such a prestigious group into the Park’s portfolio and we look forward to the new challenges of extending our business.

“We believe this is the right move for us. It is a purchase which sits well within our ethos and it is one which we are confident will enhance our business and add even more value.”

Ross Park, director, added: “We are moving in to new territory and we cannot wait to get started.

"The acquisition was assisted by the support of the Bank of Scotland, in terms of funding, and that of our current partners, BMW, Jaguar, Land Rover and Honda who were all supportive of increasing our representation of their brands.  We are also delighted to forge new relationships with fantastic brands such as Ford, Toyota and Mazda.”

Mark Hull, Bank of Scotland’s relationship director said: “The purchase of Macrae and Dick is a perfect fit for the business and we look forward to continuing to support its growth ambitions to make the group an increasing driving force within the Scottish motoring industry.

“Macrae and Dick, based in Inverness, Elgin, Aberdeen, Stirling and Perth, remain major dealers in these areas due to its ongoing philosophy of offering the highest quality and service to their customers. Again, this fits well with Park’s, which prides itself on its own industry leading standards.”

Francis Hamilton, majority shareholder and chairman of Macrae and Dick said: “When we decided we were to sell the business we sought out a motor group in Scotland which was similar to our own and one which likewise expresses commercial competence, courtesy to its customers and concern for its staff.  In that I have identified Park’s Motor Group whose chairman, Douglas Park, I have known for decades and he has my absolute trust in these fields.”