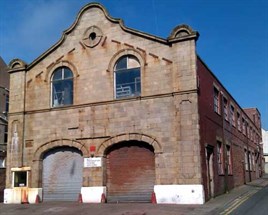 A series of "carscapes" or motoring-related sites, including the birthplace of the Morris Oxford car, have been given listed building status by the Government.

The 13 sites also include a 100-year garage (pictured) built to serve the now-closed Savoy Hotel in Blackpool, as well as Empire House in Brompton Road, west London, which was built in the first years of the 20th century as the offices of the Continental Tyre and Rubber Company, and one of Britain's first examples of an American-style filling station dating from 1926.

The earliest building given listed status is the "motor stables" built by pioneer Sir David Salomons at his house at Broomhill, Kent, which dates from 1900. The garages were dedicated to the management and maintenance of motor vehicles and remain almost as Salomons left them.

The most recent buildings include the Forton Tower and the Tower Garage at Alderley Edge, Cheshire, built in 1962. Inspired by the space age, it boasts a flying saucer-shaped roof. It is now both a car showroom and a diner.

All the sites have been given Grade II listed building status by the Culture Department.

The Morris Oxford garage in Longwall Street, Oxford, was built around 1909/10. It has now been converted into student accommodation but the facade survives.

Heritage Minister Ed Vaizey said: "There was an undeniably romantic flavour to motoring in the UK during the first half of the 20th century. Cars looked distinctive and many designs we now think of as classics were born in that era.

"What's less well recorded, however, are the buildings and structures that provided the setting and infrastructure for the golden age of the motor car. These listings, and the book being published alongside them, go some way to filling that gap."