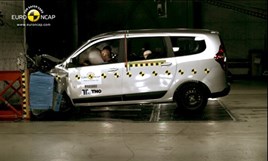 The Lodgy was the only model from the latest tests not to get five stars. The Fiat 500L; Ford Fiesta; Ford Kuga; Hyundai Santa Fe; Mercedes-Benz A-Class; Mitsubishi Outlander; Opel Mokka; Seat Leon; the Skoda Rapid and its twin, the Seat Toledo; Subaru Forester; the new Range Rover; Volvo V60 Plug-In Hybrid; and the seventh-generation Volkswagen Golf all achieved a five-star rating.

In the frontal impact, the Lodgy’s screen pillar was heavily deformed at the top of the windscreen and the roof was bent in front of the B-pillar.

The rear passenger floor panel and tunnel were completely separated, extending into the driver's footwell and the transmission tunnel was deformed between the front seats.

In pedestrian protection, the Lodgy’s score of 44% compares unfavourably with other cars in this release, all of which scored more than 60%.

The child protection score of 77% is unexceptional and does not live up to the self-acclaimed “family vehicle” reputation. Finally, Dacia has decided not to make electronic stability control as standard equipment, exploiting the last possible opportunity before the technology became mandatory.

Dr Michiel van Ratingen, Euro NCAP secretary general, said: “It is disappointing to see the Lodgy do badly in our tests; especially coming just a week after the Sandero, branded a Renault in South America, was given a poor one star rating by Latin NCAP.

“The Lodgy is a budget vehicle and customers will accept compromises in comfort and performance, but not safety. Euro NCAP believes that occupants’ safety should be paramount, regardless of how much they pay for their vehicle."