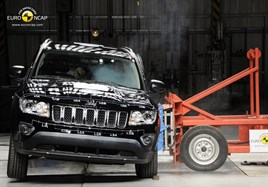 The ninth generation family hatchback achieved high scores in all areas of assessment, putting it on a par with its rivals in this competitive market segment.

At the opposite end of the spectrum is the recently refreshed Jeep Compass which only achieved a two star safety rating and was “underachieving in most areas of the assessment”.

The compact SUV was tested with an optional side thorax airbag but its test results showed poor protection levels, particularly in the side pole test.

In pedestrian protection, the Compass scored a disappointing 23%.

Euro NCAP said: “Compact SUVs are the most popular sport-utility segment in Europe, but the Jeep Compass did not demonstrate itself as a strong contender on safety in comparison to other tested competitors in the same category.”

“Many carmakers have moved on and so have we. Cars based on older technology, brushed up and marketed as new are not providing the same levels as safety as the newest models developed against the new targets. Consumers interested in a fair comparison will not be fooled by these results.”