Franchised dealers made an average return of 0.8% in 2011 according to the latest figures from ASE, the business management company.

ASE said that on the face of it, a 0.8% return looks to be a “superb result” considering the current economic climate.

Absorption on average is now well below 60% which puts massive pressure on used vehicle performance with the low current volume (and profitability) within new vehicle sales.

The averages do, however, cover a significant split in performance. A small number of brands are currently producing exceptional results with all of their dealers making significant profits.

While there has been a slip in the return earned by the top 10% from 4.8% to 4.5% compared with 2010, the top dealer in 2011 are significantly larger and are averaging £400,000 profit per site.
This contrasts massively with a number of predominantly volume (or used to be volume) brands where the average is hovering around breakeven.

ASE said: “This is clearly a concern for all and we are likely to see a downsizing of these networks as we move towards block exemption.

“Given the increasing reliance on used vehicles for profitability it is disappointing that we have not made significant progress increasing return on used car investment. Moving this upwards towards the benchmark has to be an area of focus for 2012.” 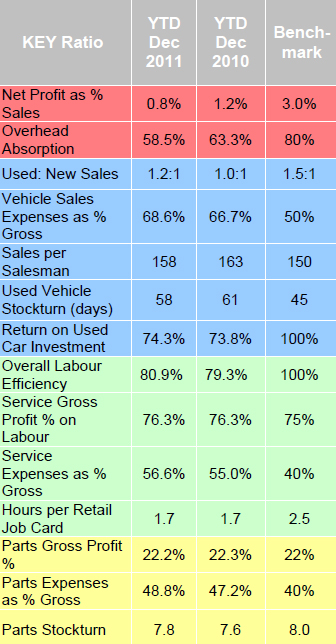