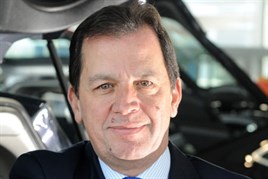 Essex Auto Group was born as Essex Ford in 1989 when Philip Maskell had an opportunity to buy his first dealership, in Basildon, with a £3 million investment from venture capitalist.

Ten years later he bought out the venture capitalist. Several acquisitions on, the business rebranded as Essex Auto Group when, like many other retailers traditionally devoted to the Blue Oval, it expanded its franchise portfolio to take advantage of the broader opportunities on offer.

Mazda was first in 2004, then came Fiat, Kia, Seat, Volvo and Skoda. Maskell said multi-franchising was a logical step for a business operating five Ford dealerships between Southend and the M25.

South Essex had been a Ford heartland for decades, given the tens of thousands of people historically employed there at carmaker’s production facilities.

Today, despite rationalisation, the region is still strong for Ford sales, with the Dunton Technical Centre near Basildon, Dagenham engine plant and the Ford of Britain national sales company’s home near Brentwood. However, in the light of fewer Ford employees to sell and service, Maskell faced a conversation with his carmaker partner.

“The good news for Ford was that we’ve retained all five points of representation for the brand here. My strategy was always to retain the representation and renew facilities through relocations and development of existing sites.

"Without multi-branding we couldn’t keep all five points going. The area would have only sustained three.”

Nevertheless, he emphasised that Ford remains core to Essex Auto Group’s business. Every fourth new car registered in the territory is a Ford, and the 91st-placed AM100 dealer group still derives 70% of its £105m turnover with the brand.

Its £7.5m dealership, on the doorstep of Ford’s Dunton R&D site, was built on land bought from the carmaker so as a courtesy Maskell insists on the property remaining a solus site.

“With seven sales brands, one or two of those at any point might be in a product down cycle or up cycle so by diversifying I’m spreading the risk. However Ford is paramount to the group.”

“We’ve studied the multi-brand model so as to be one of the best examples of doing it right,” Maskell said.

Each new addition was considered slowly and deliberately, to ensure it complemented the existing business and plan the additional infrastructure and management necessary.

It was three years before Kia was introduced, and four before Fiat.