More MGs on the way to UK 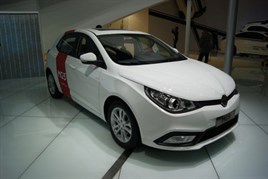 The MG brand stalled in 2004 and it has struggled to get re-started. But things are looking up according to design chief Tony Williams.

While we haven't see too much yet from MG under Chinese ownership, we can expect a lot more coming to the UK in the future he added.

"There has never been so much investment in MG," he said. "The brand is central to the global ambitions of the parent company."

There will be one new model coming next year to join the current MG6. This will most likely be the B-segment MG3 although the company has just launched the C-segment MG5 in China. Also in the line-up is a crossover based on the MG3.

Williams heads up the design for MG and its sister brand Roewe. Both are owned by China's SAIC which bought the intellectual property rights to the old Rover 75 and later acquired MG.

While Roewe is the domestic brand for China, MG will ultimately lead the export charge for SAIC. The MG6 is already on sale in the UK - and being assembled at the Rover plant in Longbridge. That is currently the only European market while some cars are also being sold in developing markets such as South America.

Both brands are selling well in China thanks to the 'Britishness' of the cars. "This plays very well with Chinese customers," said Williams. "Imported cars are very well thought of and with MG and Roewe we can give them the best of both worlds, locally built cars with the look and feel of an imported one.

"I call them fusion brands, a blend between British and Chinese. It's why we have a multi-cultural design team.

"This Britishness appeals particularly to younger MG customers who are very progressive and discerning. The market is very different from Europe in that people are buying their first car when they are in their late teens or early 20s.

"While MG is more sporty and dynamic, the Roewe brand cars are more elegant and refined. Chinese customers generally tend to be more conservative than in Europe where people are much more open to progressive design."

The Roewe line-up has progressed somewhat from the original Rover 75-based model. It now comprises 350, 550, 750 and the large 950 limousine.

"The 950 has only just been launched and it is huge," said Williams. "There is a lot of room in the back and we think it will appeal to business and government bodies where people tend to be chauffeured rather than driving themselves."