Average dealer made a loss in February

The average UK motor dealer reported a loss of £3,700 in February to leave them slightly in the red coming into the key month of March.

According to the latest figures from ASE, the business management company, this was an improved performance over 2011 and reflected a continuation of the trends seen in January.

The figures also show the success of aftersales departments continued to worsen with the gap in overhead absorption statistics growing from January.

Mike Jones, dealer profitability specialist at ASE, said: “Given the challenges in limiting overheads and the difficulty in growing service work when faced with declining vehicle parcs we would expect this trend to continue throughout 2012.

“Contrasting this, and more than making up for the drop, is an improved performance in vehicle sales. We can see an improved used vehicle performance for dealers with the average return on investment growing to over 100% at the end of February. This was predominantly a result of a larger than normal seasonal run down in stocks, also potentially reflecting difficulties sourcing good stock.”

He said: “It will be interesting to monitor whether dealers continue to sweat their sales assets harder, both in the forms of used cars (through increased stockturn) and sales staff (through enhanced sales per salesmen), however the initial signs for an improved sales year are promising.

“Fingers crossed that this performance continues when we receive the results for March as this will set the tone for the overall performance for 2012.” 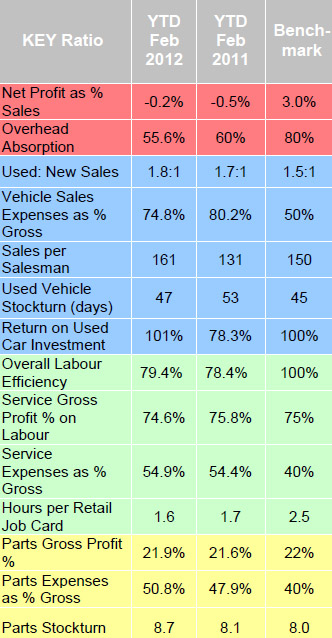