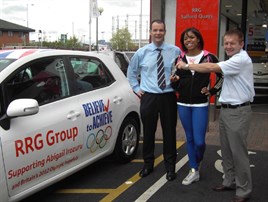 As part of RRG’s sponsorship Irozuru has been supplied with a personalised 2012 Toyota Auris by RRG Group at their head office in Salford.

Irozuru, who hails from Manchester, competes for the Sale Harriers, former club of GB athletes Diane Modahl and Darren Campbell.

She is a seasoned professional both at home and overseas, winning gold at the 2008 Commonwealth Youth Games for Long Jump and 2012 National Indoor Long Jump Silver and gold in her first senior international in Bratislava.

Irozuru said: “As a proud northerner, I’m overwhelmed that local company RRG is supporting my bid for sporting success. I have an intense training schedule that involves a lot of travel across the UK so having my own transport is going to make my life a lot easier.

“It's not just the material support that I'm excited about - even though receiving this brand new personalised Toyota Auris makes me smile from the inside out - it's also the realisation that somebody has faith in my abilities and my potential to exceed expectations; to do what many may believe impossible and to actually be competing at the Olympic Stadium at the London 2012 Games.”

Tony Cliff, RRG group managing director, said: “We have a history of supporting local sportspeople and clubs and we’re thrilled to sponsor and support our local sporting hero Abigail Irozuru with this fantastic new car.

“Her gruelling training schedule across the UK will hopefully be made slightly easier now she has her own form of transport to get around in and we wish her the best of luck for the upcoming Olympics.”