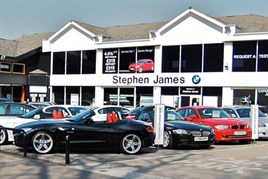 Ben Collins has clear views on three important aspects of managing an AM100 business.

In his case that’s Stephen James Group, which holds BMW and Mini franchises at three locations in Greater London and one in north Kent.

First, the managing director insists who is boss in discussions with the group chairman (who agrees).

That’s essential, because the chairman is his father Duncan who used to sit in the MD hot seat.

Most of their discussions about business prospects are during a fortnightly game of golf.

Second, Ben Collins has no aspirations to grow the family business for the sake of it.

“Now I want our four sites to have the best people offering the best service – our focus is on quality.”

But if BMW should ever put a proposal on his desk to add an adjoining territory, it would be considered.

Third, Ben Collins runs the business according to the Christian values of honesty and integrity he shares with his father. Their dealerships do not open on Sundays.

Five core values are the backbone of a 126-page booklet, which all members of staff are expected to respect. Living the values’ applies whether they have a different faith, or none.

Collins is a hands-on manager with the final say on every staff appointment, from car valeter to a dealer principal.

“This means I can never tell anyone in the business ‘I wouldn’t have taken on him or her’”, he acknowledges.

“I ask people applying for a job what they know about Stephen James and form an impression of them.”

His business reacted swiftly to the financial crash in the spring of 2008.

Like most dealer groups Stephen James went through the pain of cutting jobs – 60 full-time posts were cut from around 363 in the April of that year.

The total is now 291 and has not climbed back.

“The way BMW UK helped the network with stocking support in 2008 and 2009 made a tremendous difference and got us through the crisis,” said Collins.

Collins said competition was intense for sales of new German premium cars in 2012. “BMW is holding the line,” he said.

“It has provided support, but not to the same extent as Mercedes-Benz and Audi, which was forcing the market in the first few months of the year.”