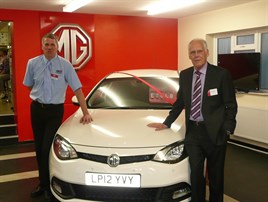 Brown & Gammons in Baldock, Hertfordshire has specialised in MG cars for 35 years but has now added the new car franchise for the first time.

The dealership officially opened with the new car franchise this week and sold a new MG6 at the launch event.
Chairman Ron Gammons said: “This is a dream come true for us.

“We were an authorised MG repairer years back and have worked on almost every MG model, but we never held the full MG sales franchise.

“We’re so proud to be appointed and can’t wait to start selling the new MG6 models, which I rate as highly as any of the MG classics. We love the MG history but with cars like the MG6 the brand has a great future.”

Brown & Gammons in High Street, Baldock, has a staff of 20 people and is run by Gammons and his son, Malcolm.
The showrooms in Baldock are 30 miles north of London and the business is planning to invest around £60,000 on MoT testing facilities before the end of the year.

Earlier this year new MG dealerships opened in Stoke-on-Trent, Brighton and Derby another is about to open in Lincoln.

MG has supplied a fleet of cars to the Jamaican and USA Track and Field Training Camps where some of the world’s top athletes, including sprint stars Usain Bolt, Yohan Blake, Asafa Powell and Tyson Gay, are training.

Both camps are in Birmingham with the Jamaicans based at the University of Birmingham’s Munrow Sports Centre and the Americans at the city’s Alexander Stadium in Perry Barr.

MG6 GT fastback and MG6 Magnette sports saloons have been loaned to the camps to help the athletes get around during their stay. The cars are emblazoned with the Jamaican and USA national flags.