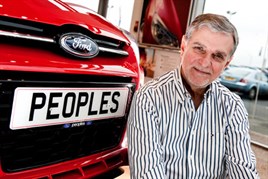 Jeremy Bennett, AM editor: Peoples is very much your business, since you started it in 1983. What is the management structure you have around you?

Brian Gilda: We have two large trading companies. One is Liverpool, with three sites, at Bootle, Speke and Prescot, under a senior manager. The second is Scotland, with Edinburgh, Falkirk and Livingston under another senior manager.

We have five senior directors; myself, Stuart Ramsey, my finance director, Nicola, my daughter who’s a graduate and runs HR, and the two seniors.

The management structure is very flat, so there’s nothing that comes between the operations and myself.

JB: There are six dealerships in your business?

BG: There are subsidiaries, Peoples Liverpool and Peoples Edinburgh, and they’re managed by Peoples Limited which is really a holding company. It doesn’t have any other material benefit.

JB: If you had 30 seconds to explain what you do that works and maybe is different to others that came to Liverpool and failed or are struggling in similar conurbations, what do you think it would be?

Some say that if you’ve got manufacturers threatening to drop dead in front of you it doesn’t matter how good you are.

So, you’ve got to pick a manufacturer who’s capable and in this fast churning world, Ford was always my choice.

We’ve had other franchises. I chose to only commit to Ford because I felt reasonably sure that the Ford family would not put the business into Chapter 11 bankruptcy, but work hard to sort themselves out and carry on.

Alan Mulally (Ford president and CEO) has done a spectacular job. I know dealers who would have said the right thing to do is to go multi-franchise, but I believe that was completely and utterly, at that time, the wrong thing to do.

JB: Why is it? Because your fortunes are tied, aren’t they? Do you feel that with Ford there are going to be the highs and the lows, but it will survive?

BG: It was partially that. I felt that they would have the potential to survive whereas other manufacturers would get themselves into a terrible knot, and have dealers go through purgatory. And I may be overly loyal, but in the fullness of time Ford would deliver results for Peoples.

JB: In a multi-franchise set-up you are faced with each manufacturer expecting the same or majority share of voice in your business…

BG: In a multi-franchise world, say with four or five different franchise managers working in the same company, your credibility is stretched. And how easy is it to find the quality?

My senior sales manager has worked for me for a bunch of years, he’s a graduate, we put him through university, he’s got a degree in marketing. Could I find another like him? I just chose not to have to try.