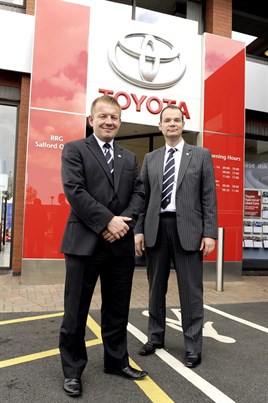 Acquisitions are on the cards, but business rescues are certainly not. Cliff said it is easy to buy a bad business, and the group has tried it in the past, but it takes a long time to turn it into a consistently good dealership.

The targets for RRG are good businesses, making a profit, and with a location which will fit in with the group’s north-west regional focus, an hour or so from Salford. Bangham agreed that with RRG’s experience with premium and near-premium brands many of the German brands would be a potential fit, but said the franchise choice is secondary to identifying well-run businesses in the top quartile.

“The top 25% are always performing above a 2% return, and those are the good businesses and that’s where we see ourselves. So we always need to perform above or in the top quartile of the manufacturer and then if we can do that we’ll get good returns out of any manufacturer,” he added.

Bangham said the whole group is achieving about 1.5% return on sales at present, but its Toyota businesses achieve around 2.5%. Once Mazda’s and Peugeot’s market shares improve, with new product coming through, RRG expect better performance from that part of the business. Cars such as the Mazda CX-5, Peugeot 208 and Toyota GT86 are getting its teams very excited.

A benefit of having a flat management structure is the ability to react to opportunities and respond to problems. The general managers are empowered to operate their dealership as if it were their own business, with support of central HR, IT, call centre, accounts and marketing functions, while reporting in to Bangham and Cliff and tapping into their wealth of experience when needed. Bangham worked his way up in the business from joining as group accountant 17 years ago, while Cliff started 26 years ago as a junior sales executive.

The two managing directors themselves report in to their Japanese chairman, however Marubeni recognises them as the motor retail experts and leaves them to run the business.

That freedom to act, to change things quickly, has paid dividends in recent years. As the data from AMi shows overleaf, even in its 2008 financial year RRG stayed in the black. It saw operating profits plunge from £3.5 million to £767,000, but recovered quickly the next year as the group had acted fast to address the cost base and re-engineer the business. Bangham and Cliff called in their general managers to go through their businesses – in little more than three months RRG took £3m of cost out of the business, including some headcount, expensive demonstrators, fuel cards and unnecessary perk cars.

Such an exercise requires the leadership to question everything, said Bangham. Some things in business are done because they become habit, and these must be challenged.

The focus on efficiency has not been achieved at the expense of the customer. The ambition still is complete customer satisfaction, and seven of RRG’s nine Toyota dealerships are within the top 20 for the manufacturer’s CSI league.

From listening to Bangham and Cliff one element is critical to achieving this level – selection and development of the people who work in the company. Some 80% of the group’s managers have come up within the business from starting in junior roles. They know their business and their customers.

Bangham said RRG was fortunate in not having many vacancies. The company might even have a reputation of being hard to get into from the outside at a management level, Cliff said, but that’s because it expects its people to deliver consistently.

He added: “Our professional culture is of a standard that’s abnormally high, and sometimes we don’t appreciate how good our guys are in the fact they meet those standards on a daily basis and that gets us through recessions, through recalls and through tsunamis. When it snows, we don’t close, we clear the snow. Our guys know that sitting there drinking coffee and feeling sorry for yourself is not acceptable. Just getting to work on a snowy day is not enough.”

“There’s a spin side to this. We’ve got commit to our guys that we’ll give them the best facilities, we’ll give them training, and we’ll be accessible at all times. We do debate points, we’re not dictators.”

“We’re big on nights out. We have many challenges each month, areas where teams can win money that’s used to go out. We go to a fair few of them, you take the MD coat off and get stuck in.”

Bangham added: “People cannot be fearful of making mistakes. You make a lot of mistakes, but that’s how you learn. We have a culture of trying new things, if it doesn’t work out then move on and do something else.”

Customer loyalty is one of the benefits of strong focus on service, but to maximise this RRG uses all the industry tools such as service plans, PCPs and F&I. Sales of all of these, plus others such as tyres and parts, are measured constantly with feedback shared every Monday by the managing directors at a meeting with the general managers of each location.

It is this genuine approach to leadership and business management which filters down through the culture of the company. Regularly the senior team will do impromptu site inspections, checking elements down to the neatness of the archiving and cleanliness of the toilets. It is drilled into everyone at RRG that the business cannot afford to miss any of the tiny details.

Cliff emphasised: “What we’ve had to do since 2008 is get a nine out of 10 in every area of the business, from cost control, parts turn, used car turn to the way we do any Motability, because you can’t afford to get a seven or six. Efficiency wise, if you’re below a nine you won’t make any money.”

With certain franchises there is only so much return available, he said, but with there being a significant difference in returns between the middle tier and upper quartile the role of the dealership is to ensure it is achieving a great return rather than settling for average, he said.

Cliff claimed that if RRG had been as strong in all areas prior to the recession as it is now, the group would have been achieving a return of 5-6%.

Bangham added: “Ultimately, the way to keep going in this business is keeping customers happy, then you can grow. What we have to do is change as customers’ demands change.”

The two admitted that with the ambition to increase the portfolio will come the need to “let the reins go” a little. The solution goes back to RRG’s focus on recruitment and development of the right people, they said.

Asked about the implications of their expansion plan, they said it would likely mean the appointment of a third managing director or a divisional director reporting to the MDs. They see the challenge being in getting the right people in place with all the businesses, with that done their job will be easier. With the talent pool within the group, Bangham and Cliff are confident they already have general managers who can step up and do more.

With its capability of integrating suitable businesses quickly, the backing of its well-funded global corporate parent, and the talent being developed within, RRG truly appears poised to fulfil its ambitions.

Click on page three to read about RRG's views on people, processes and complaints.