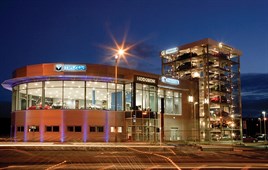 No-one disputes the point that the UK’s network of franchised car and LCV dealerships has shrunk in the past decade. AM’s own archives and the AMi intelligence service suggest the network has diminished by some 1,100 dealerships to around 5,600 locations, as at the end of 2011.

An interesting point to consider is whether that 19% decline is due in any part to demands by brands for franchisees to invest in larger retail facilities.

For carmakers, a large, modern showroom will do wonders for promoting its brand and attractively displaying its breadth of vehicle range. But for the retailer it suggests higher overheads that will need to be absorbed by a higher volume of business in a wider market area.

David Chittenden, head of automotive and roadside at property consultants Colliers, said he believed there was a correlation. In the future he sees large conurbations occupied by fewer, larger dealerships with aftersales sites perhaps in support at more marginal towns.

Nevertheless, the investment in property is largely driven by the franchise and its business cycle.

Some mainstream brands are now closing marginal locations or allowing multi-franchising because of their own decline in market share and overall vehicle parc. Other expanding brands are requiring larger showrooms.

“It’s a moving feast all the time, depending on the particular cycle the franchise is in,” he said.

One issue for dealers with surplus property is the relatively poor demand. Pre-recession, the underlying alternate use values were strong, he said, but now they aren’t, except for food retailing, so that poses a problem for the dealer’s exit strategy.

In addition, showrooms created bespoke for a particular brand will have implications if in the future the dealer risks having that franchise terminated and told who to sell to under the General Block Exemption from June 2013.

“Every manufacturer has to sit up and really consider where their market share will be in five years’ time,” added Chittenden.

“The problem is that there are too many dealers in a two million annual new car market. Some of these dealerships were built for a 2.5m market.”

Prevailing market conditions and changes in the way consumers are buying vehicles almost suggest a decision looming in the years ahead which most carmakers would currently baulk at – end the demands for larger showroom investments and properly consider the long-term future of car retailing.

A second point for consideration must be whether the dealers’ sales volumes have increased in proportion with the increased minimum size of showroom in their franchise standards during the past decade.

A few years ago, Grant Thornton suggested a national network of around 4,000 dealerships would be part of the future.

More recent research for manufacturers by the ICDP has examined diverse business models, from differentiated standards by location or depending on retail, fleet or internet focus, and reduced structural costs by separation of sales.

It has even considered internet-led networks with the primary customer interaction being online and a physical network in a support role. The public is increasingly acc-epting of making major purchases, such as foreign holidays and electrical equipment, over the internet. Click-and-collect services are also growing in mainstream retailing.

As the ICDP states: “In the face of flat, unpredictable markets and the increasing influence of the internet on consumer behaviour, manufacturers and dealers need to reconsider whether the traditional style of investment in physical sites remains appropriate in the coming years.

“Networks are primarily designed around geo-demographic data, using a common sales/service/parts format at each selected location. ICDP believes this approach is no longer valid, and has looked at some individual opportunities for change, demonstrating the financial implications of introducing multiple formats and multi-branding.”

Daniel Taylor, head of automotive advisory at Grant Thornton UK, said recent data reviewed by Grant Thornton suggested the average annual new car registrations per UK franchised dealer had fallen from 460 in 2002 to around 420 in 2011.

A fall in total industry volume from 2.5m units to just under 2m in a decade has clearly put some networks under strain.

More restructuring of sales points may be needed to improve the volume for the retailers who remain. Peugeot and Renault have already made cuts; Mazda will shrink its network by around 12% by 2015.

Usage of company cars and growth in online leasing brokers has also had an impact on franchised networks. Pendragon chief executive Trevor Finn told AM earlier this year that the biggest change for his business of the last 10 years has been the emergence of the fleet and leasing industry and a corresponding shrinkage in the new car retail opportunity.

Finn said: “If you look today at the car market, retail is about 800,000-plus out of a 2m car market. That’s probably saying that the new car market for retailers is less than half, but the footprint hasn’t halved in the last 10 years. Throughput per location is a big issue this time around.”

He was also critical of the limited return on investment offered by the current franchise business model.

“There’s a lot of investment in this sector which cannot be sustained forever if people don’t make a return. Without the smokescreen of property appreciation, how profitable are car dealers? They have to be profitable in their own right, and I think that’s the challenge,” he said.