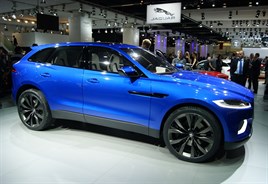 Jaguar is planning to launch four new models before 2018 which will help it better compete with German premium rivals.

Adrian Hallmark, Jaguar Land Rover global brand director, told Autocar its compact saloon model will launch in 2015, followed by an estate model and a compact SUV. There could also be a coupe and hatchback version of the saloon model.

Jaguar has already revealed its C-X17 concept at the Frankfurt Motor Show which could hint at what the SUV could look like.

BMW, Audi and Mercedes-Benz dominate the premium segment in the UK and other brands have found it difficult to establish a foothold against them.

Do you think Jaguar can compete against German rivals? Let us know in the comments section below.