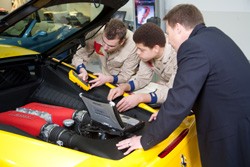 English businesses have taken advantage of 18,900 grants for apprenticeships in the last 12 months.

The data from the National Apprenticeship Service covers the nine month period since the Apprenticeship Grant for Employers of 16 to 24 year olds (AGE 16 to 24) was launched in February 2012.

It reveals there were 6,800 apprenticeship starts, for which a payment was made through the initiative, with a further 12,100 in the pipeline between February and October 2012.

Around two thirds of the grants awarded were to recruit an apprentice aged under 19.

Business can still take advantage of a £1,500 grant if they have never employed an apprentice before, or have not done so in last 12 months.

Initially only on offer during the 2012/13 financial year, it was announced last month that the funding has been extended until at least December 31, 2013.

David Way, chief executive of the National Apprenticeship Service, said: “Apprenticeships can deliver the skills that businesses need to grow and I would therefore encourage more organisations to explore the funding available and find out how they can benefit from introducing an apprentice into their workforce.”