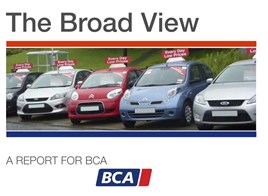 A new report from BCA, The Broad View, examines the European economic outlook, new car sales, used supply and the implications for dealers.

Written by Professor Peter Cooke, of the Centre for Automotive Management at Buckingham University, it aims to provide food for thought for franchised and independent operators.

Cooke commented: “The current prolonged economic malaise has had a more serious effect on the car parc than its 1991/1992 predecessor, when new car sales dipped for just two years before making a marked recovery.”

BCA managing director Spencer Lock added: “The importance of both new and used vehicle sales to the health and wealth of the UK economy is undeniable.

“Both franchised and independent dealers have had to move quickly and adapt to a marketplace where consumers are being squeezed and every sale is a hard fought victory.”