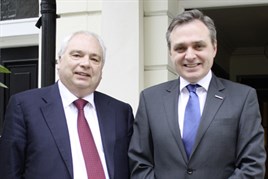 The strength of a business can usually be measured by the strength of its relationships and this has been essential to Meridian Motor Group, which trades as Vantage.

The value the group places on friendship and trust is what is carrying it towards expansion with other brands after 10 years with Toyota.

The group is in a transitional phase as it looks to grow with three new brands and beyond its Yorkshire territory with its acquisition of Sytner's Lexus and Toyota business in the Midlands without losing its family values, as well as breaking into the AM100 with a turnover of £125 million.

The expansion into the West Midlands brings the Lexus brand into the group for the first time with Sytner’s Fort Dunlop dealership near Birmingham as well as Toyota centres at Fort Dunlop, Solihull and Tamworth.

All will operate under the Vantage banner, with the rebrand and launch accompanied by “significant investments” in site upgrades.

The acquisition, which brings the number of Vantage dealerships to 12, is a signal of the group’s ambition to become a "national force".

The group is led by Mark Robinson, who worked at Sandicliffe as operations director for almost five years before joining Pendragon from 1998 until 2002.

e then joined Lookers as a director before branching out to create his own business in 2003.

Robinson started out on his own as one of 12 Toyota sponsored operators before acquiring three Vantage Toyota centres in Lancashire to unite all of the group’s dealerships under the Vantage name.

In June 2010, the group relocated its Bridlington showroom to its new premises in Scarborough and a year later it expanded beyond the Japanese brand for the first time with its purchase of Vantage Hyundai in Salford, Manchester.

After running the business for three years, Robinson invited Phil White to join the board at Vantage following a friendship which had been built up after meeting in their hometown of Harrogate.

White had just stepped down from running the National Express Group and was ready to take on non-executive positions.

The pair went out for dinner and Robinson popped the question: “Will you sell cars with me?”

At the same time White joined Vantage he was also approached, coincidentally, by Lookers to chair its board just after Pendragon made a failed £258m bid for the business in March 2006.

Robinson said: “When you start a business after working in a PLC environment it can be very lonely.

"Having Phil on board is a bit like having a set-up like Dragon’s Den. I can run ideas by him and he keeps me on my toes.”

White’s role is very much a traditional PLC-type chairman and he’s not in the business every day. However, he acts as a mentor for Robinson and they are in contact every day.

White said: “It’s useful to have a partner. Sometimes it’s nice to be challenged and to share ideas with each other.

"It’s a very mature relationship and we trust each other. We’re not clones and we have skills in different areas, but they tend to complement each other. You can see clearer from a distance too."

"When you’re in a day job you can sometimes miss the obvious when you have so many pressures to deliver.”

White has learned all about the motor trade from Robinson and his time at Lookers and has been instrumental in helping the group with its relationships with banks and funding.

The relationship with RBS during the recession was particularly useful in helping the group react in 2008 and deal with what Robinson describes as a “roller coaster” with the Toyota recall in 2010 and the Japanese tsunami in 2011.

It’s clear long-term relationships are important for the business and, as White explains, the partnerships you can truly depend upon are always highlighted when a business hits difficult times.

White said: “RBS bent over backwards to help us get through the recession and this was because of the relationship we had built with them.

“The same thing has happened with Toyota.

"The more we have developed our relationship, the more opportunities have been coming our way.”

Vantage adjusted the business in 2008 to what Robinson describes as “global financial Armageddon” and bounced back with the group’s best year in 2009.