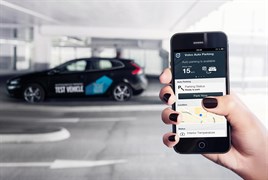 The technology on a Volvo concept car finds and parks in a vacant space by itself, without the driver inside. The driverless car also interacts with other cars and pedestrians in the car park.

Thomas Broberg, senior safety advisor Volvo Car Group, said: “Autonomous Parking is a concept technology that relieves the driver of the time-consuming task of finding a vacant parking space. The driver just drops the vehicle off at the entrance to the car park and picks it up in the same place later.”

Vehicle 2 Infrastructure technology, in other words transmitters in the road infrastructure, informs the driver when the service is available. The driver uses a mobile phone application to activate the Autonomous Parking and then walks away from the car.

The vehicle uses sensors to localise and navigate to a free parking space. The procedure is reversed when the driver comes back to pick up the car.

Autonomous steering in the next XC90

"The autonomous parking and platooning technologies are still being developed. However, we will take the first steps towards our leadership of autonomous technology aim by introducing the first features with autonomous steering in the new Volvo XC90, which will be revealed at the end of 2014," said Broberg.

The Volvo marketing video for its Autonomous Parking concept technology: