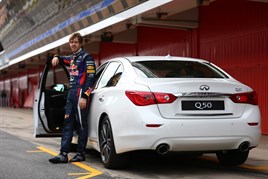 In a segment dominated by German manufacturers, the Q50 is intended to be ‘fresh and distinctive’.

“In particular our direct response technologies deliver the most advanced performance and handling combination in the sector.”

The company makes great play of the fact that its handling technologies have ‘been influenced’ by F1 World Champion Sebastian Vettel.

The Q50 line-up will include ‘grades, packages and options to appeal to the widest possible range of both private and fleet buyers’.

First deliveries are expected in September.