Landlord puts home of Belfast's Infiniti dealership up for sale 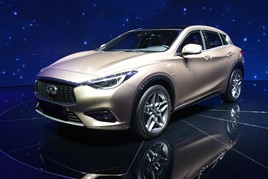 A commercial site that is home to Belfast’s Infiniti dealership has been put up for sale.

Landowner Kilmona Holdings is asking for £1.3 million for the 1.1-acre mixed development, known as the Meadows Centre, which as well as being home to the Mervyn Stewart Infiniti car showroom also has retail, warehouse and trade counter units.

It is within a few hundred metres of Boucher Road, and near neighbours include Agnew Mercedes-Benz and BMW, owned by Sytner Group, and Lookers’ 30-acre Charles Hurst motor retail park.

AM understands the dealership will not be affected by the sale of the property.

The Mervyn Stewart Infiniti dealership, which opened in late 2016, is the only remaining independent dealership for the Japanese premium brand, which brought its remaining UK sites under manufacturer ownership.

Infiniti announced earlier this year that it will exit the UK in 2020. (Click here to read 'Infiniti to withdraw from UK').

When it launched here in 2009, with its first dealership in Reading, set up by Lebanese group Rymco, it promised a boutique hotel-style customer experience, with a customer account manager appointed for each buyer to serve as a single point of contact throughout their ownership.

The brand promise free collection and delivery within a 150 mile radius for servicing.

It had hoped a dealer network of up to 14 sites would drive annual sales in the UK up to around 4,000 units within five years.