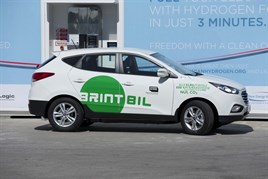 Hyundai is ramping up its hydrogen fuel cell (FCEV) activity and in order to take advantage of a potential emerging market which forecasters believe could represent 10,000 units in the UK by 2020.

One of the issues standing in the way of success for FCEVs, other than the high price of entry for the technology, is the infrastructure for drivers to refuel. Having in infrastructure in place will be essential if FCEV are to have any mass market success.

Hyundai recently became the first manufacturer in the world to put a fuel cell car into full production, with plans to build 1,000 hydrogen ix35s by 2015 and another 10,000 cars beyond.

Tony Whitehorn, Hyundai president and chief executive, said: “These are not hand-built prototypes; they are proper series production models.

"We have broken the chicken-and-egg cycle as to which should come first - the cars or the infrastructure to support them."

A FCEV is an all-electric car, van or bus that makes its own electricity on the move through a chemical reaction between hydrogen and oxygen in a metal box known as a fuel stack.

The take-up of FCEVs in the UK is being encouraged by organisations such as the UK and Scottish Hydrogen Fuel Cell Associations, UK H2 Mobility, the London Hydrogen Partnership and London H2 Network Expansion.

Whitehorn said: “To establish hydrogen fuel cells you need collaboration between the vehicle manufacturers, the infrastructure companies and government. That is happening in the UK."

The aim is to have 300 hydrogen refuelling stations dotted around the country by 2025 and 1,150 only five years later.

The Sainsbury and Morrison supermarket chains recently joined UK H2 Mobility; prompting hopes that they may start to roll out refuelling pumps at their sites.

The establishment of a refuelling infrastructure is only one of the obstacles to the widespread take-up of FCEVs, however. The other is cost, which is why Hyundai will lease its initial batch of cars.

Currently an FCEV would be priced at the same level as a supercar because the fuel stack is expensive to make, but with economies of scale prices would become more affordable.

Element Energy, one of Hyundai's partners in the UK, believes there could be parity between the price of FCEV and a diesel car by 2013, while ITM Power, another partner, says that the cost-per-mile for fuel would be lower with hydrogen.

"Over the next 18 months we need to look at the cost element and bring down the percentage difference between a fuel cell vehicle and one with an internal combustion engine," says Whitehorn. "The important thing is that fuel cells are within the reach of private buyers now."