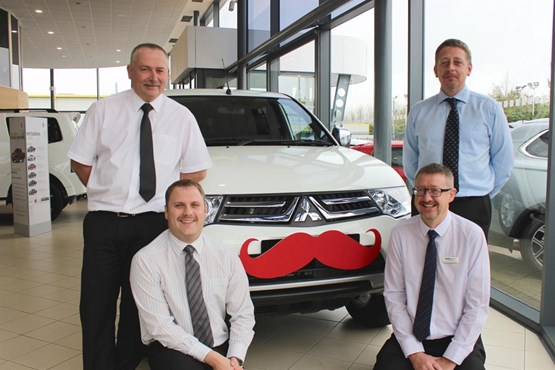 Male staff at Seward Mitsubishi on Bilton Way, Portsmouth, are letting their upper lip hair grow to raise awareness about men’s health, as well as money for charity.

They are among 24 men in the Seward Group – including chairman Kevin Clark and managing director Shaun Perry – whose razors are doing slightly less work this month as they cultivate moustaches of all shapes and sizes for ‘Movember’.

The money raised will go to the group’s charity, the Seward Cancer Foundation, which helps fund research into the disease.

Marketing executive at the dealership Kayla Morris, who has organised the initiative at the motor group, said: “I’m really pleased that so many of the men have signed up for this. It’s a fun event but with a serious message behind it, raising awareness of male health issues. Thank you to them and, of course, to all the people who are sponsoring them.”

Mitsubishi brand manager Tom Clare said: “We’re raising as much money as we can for the Seward Cancer Foundation. We have a target to hit of £50,000 by the end of the year and we’re hoping to raise £1,000 of it through Movember. We’ve got quite a lot of people supporting it, which is good.

“Cancer affects everyone on a level at some point in their life, so this is definitely a worthy cause.”

The Movember drive was started in 2003 in Melbourne to increase awareness of men’s health issues, with 30 participants. Since then, it has grown to become a worldwide movement, with millions of people involved and hundreds of millions of pounds raised.