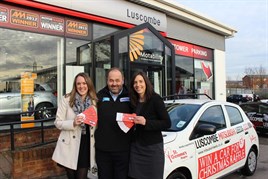 Luscombe Mitsubishi has joined forces with St Gemma’s hospice in a bid to raise £60,000 for charity.

The dealership on Low Road, Leeds, is providing a Mitsubishi Mirage as the star prize in the ‘Win A Car For Christmas’ raffle being run by St Gemma’s Hospice, after a similar venture proved a hit in 2013.

Managing director Robin Luscombe said: “It worked very successfully last year, so we’re delighted to be supporting St Gemma’s Hospice in this way again. It’s a good charity in Leeds and very important because it touches everybody. It’s a good prize, as the Mirage is such a fantastic city car – it’ll make a terrific Christmas present for someone!”

St Gemma’s Hospice, which is in the Moortown district of Leeds, is the fourth largest hospice in the UK. Each year, it cares for more than 2,500 people who have incurable illnesses, as well as offering support to the families and carers of patients.

All its services are provided free, but the running costs for this year alone are £9 million, of which £6.5 million has to be raised via various events and initiatives such as the ‘Win A Car For Christmas’ raffle

Senior fundraiser (Corporate & Initiatives) at the Hospice, Tracie Harrison, said: “We’re very grateful to Luscombe for its support again and over the moon that it has provided us with a Mirage for our Christmas raffle. We’re really pleased, because it’s such a great prize.

“Having a car as the main prize gave a big push on ticket sales last year and we’re hoping it’ll do the same again this year. In the past, we’ve raised around £45,000 from the Christmas raffle, but since we’ve had the car our sales have gone up to about £60,000 and that’s our target. By having a car as the main prize it really makes a huge difference to people wanting to play and give us their support even more.”