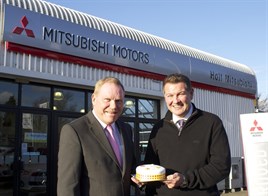 Holt Mitsubishi in Derby is celebrating its second anniversary, following a rise in sales and the appointment of additional staff since opening its doors.

The dealership in London Road, Alvaston, was taken over in 2012 by Brian Holt and has seen a 90% increase in new car sales, across the Mitsubishi range, compared to 2013.

Dealer principal Brian (pictured, right) said: “We have seen a vast improvement in sales and after sales department this year. Both departments have beaten the previous year. It’s going to be tough but we intend to beat all our targets next year too.”

The Mitsubishi L200 pick-up, a vehicle in hot demand by businesses up and down the country, was up 21% through November.

The Outlander PHEV is breaking all records and is now not only the UK’s most popular plug-in hybrid vehicle, but since September it has been outselling the traditional non plug-in hybrids.