Despite strong vehicle registration numbers, dealers have been struggling to match their 2013 profit comparatives in the first two months of a quarter, with bonuses at the end of the quarter boosting the result.

This trend, said ASE today, has continued in the first month of quarter four, with the average dealer making a profit of £5,000, a drop of £4,000 on the prior year result for October.

"This was in spite of turnover being 12% up in the month with both new and used car sales rising compared to the prior year," said ASE chairman Mike Jones.

"This should, once again, prove positive for the overall quarter result once the bonuses are released however we would expect November to follow the pattern and fail to match 2013’s result."

During October dealers did manage to clear some of the excess used vehicle stock held at the end of Q3. However, ASE says it remains concerned over the level of stockholding, particularly given signs of weakening in the used vehicle market.

"This is particularly the case amongst late plate vehicles given the current registration activity. Rolling 12 month used vehicle return on investment has now fallen 2.6% in the past two months with all the gains of the summer now given up."

Service department overall labour efficiency has continued to climb, building on the trend of the past 12 months, however this is now being more than outweighed by increased overheads resulting in a fall in overhead absorption.

"Mitigating this fall will be vital for dealers, particularly given that high new vehicle targets for 2016 will put pressure on the vehicle sales department profitability." 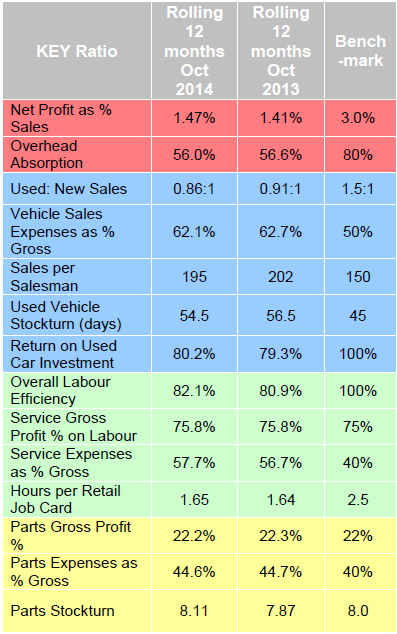