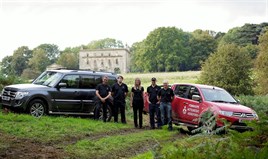 Fownhope Mitsubishi dealership in Hereford has celebrated its fifth anniversary, this year.

The car dealership on Kings Acre Road has doubled its staff from eight to 16 since opening its doors, while the showroom has been renovated and the workshop has been completely revamped with new equipment.

The team have worked hard to make the dealership part of the community, with sponsorships of young show jumper, Polly Smith, and Rally GB driver Jason Morgan. They also provide on-going support for Help for Heroes, giving the charity funding each year to print their brochures and lend vehicles to the Hereford Lions Club every December so that Father Christmas can get around the city to deliver presents.

Director of Fownhope Mitsubishi Sam Peachey said: “The whole place has changed a lot in the five years we’ve been open. The business has grown and sales have gone up dramatically. Our new and used car sales are continuing to increase and we’re looking at taking on another new sales person.”

Director Dave Peachey said: “The business is expanding and it’s hard to find good quality technicians so that’s why we took on two apprentices. They are currently going through the training programme and they are both excellent members of the team. We have invested a lot of money in the showroom and we feel that we now represent the franchise in the best possible way.”

Sam Peachey said: “It’s been a fantastic five years and we’ve made great progress. Now we’re looking forward to the next five years.”