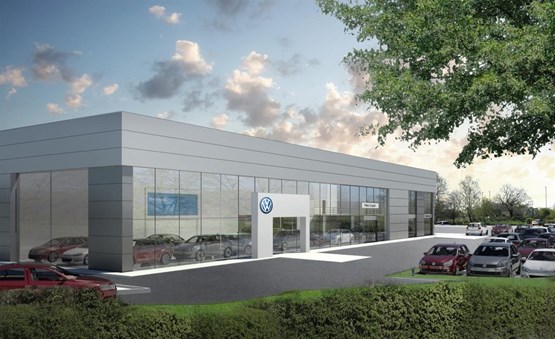 Peter Cooper Volkswagen is set to create up to 25 jobs as it announces plans to open a new £2.5 million state-of-the-art showroom.

The group is moving less than half a mile to its new headquarters at Royal London Park, Flanders Road in Hedge End. The family run firm, which employs more than 250 staff across its five locations on the south coast, will move its existing operation at Coopers’ Roundabout to the new 23,080 sq ft premises in May (2015) next year, when the build is complete.

The group is currently looking at several business options for its prime location site at Coopers’ Roundabout, but it "will continue to play an important part in the group’s future".

Darren Cooper, group managing director at Peter Cooper Volkswagen Group, said: “There is a lot of history at the current site at Coopers’ roundabout. This is where Peter started the business over 34 years ago and the site has served us very well for the past three decades but we have been keen to expand for over five years due to site constraints.

“It will be strange but also very exciting to move somewhere else after such a long time. This will be a fantastic addition to our group structure and one that we are sure our customers will love.”

“This further cements our stature as the leading Volkswagen retailer on the south coast and another exciting chapter begins. We appreciate that customers want the best possible service and experience when they buy a Volkswagen and that’s what we strive to deliver every time.”

Chris Godfroy, brand manager at Peter Cooper Hedge End, said: “It’s a very exciting move that will also enable us to employ new people in a variety of roles including service, sales, administration, management and after care.

“This is a great move for the Peter Cooper Group. The unit is ideal for the company because it has excellent main road visibility and potential for the next stage of the Hedge End dealership growth plans.”

> Artist's impression of the new dealership