MG engineers raise more than £5,000 for charity in ‘Movember’ tribute 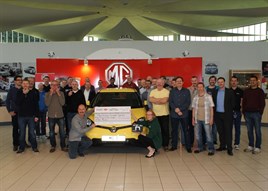 Vehicle design engineers at MG’s Birmingham plant in Longbridge have raised more than £5,000 for charity in a moving ‘Movember’ tribute to one of their colleagues currently being treated for cancer.

When Brian Freeman, a member of the electrical engineering team at MG, was diagnosed with cancer last year, his colleagues were impressed by the positive way he dealt with it.  Brian said he was able to cope thanks to the amazing support from Macmillan, so his colleagues within the electrical engineering team wanted to do some type of fund raising to give something back.

They had the idea of doing a 'Movember' challenge for Brian’s chosen charity of Macmillan and after consulting Brian the electrical team started the challenge to raise £2,000 with 10 people.

Due to Brian’s popularity many of his colleagues in the wider engineering team wanted to take part and the MG ‘Mo Bro’ numbers grew to thirty seven. Due to people’s generosity and Brian’s popularity, the 'Movember' challenge has now raised over £5,000 and donations are still coming in.

Vice director of electrical engineering Richard McAllister said: “Brian is such a positive and well liked member of the team. We wanted to do something to support the people helping him and his family through this difficult time. Brian is still very ill in hospital so the team hopes that this news will lift his spirits and give him and his family a big boost.”

Fundraising Manager for Macmillan Cancer Support, Emily Morgan, said: “This is fantastic news. It is great to see Brian’s colleagues having some fun to raise money to provide care for people like Brian when they and their families most need it. This donation alone could fund the cost of a Macmillan nurse for over one month.”