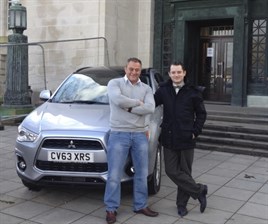 Celtic Mitsubishi gave actor Elijah Wood an ASX while he was filming in south Wales.

The actor, famous for playing Frodo in Peter Jackson’s Lord of the Rings trilogy, was filming Set Fire To The Stars, a film about Swansea born poet and author, Dylan Thomas.

Phil Reason, of Celtic Mitsubishi, offered to lend the star the car after speaking to his friend, entertainer Mal Pope, director of Swansea-based YJB Films, who co-produced the film.

He said: “It was great to be able to meet him and he was very easy-going and really friendly. We spent quite a bit of time chatting away and he signed some things for me.

He said he had enjoyed his time in South Wales, even though it didn’t stop raining the whole time he was here, and he really liked the car. He’s coming back for the premiere so hopefully we will lend him a car again then.”