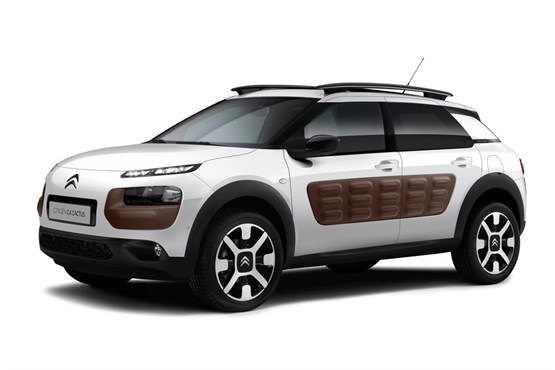 Citroen has revealed details and the first official production images of its new C4 Cactus which will go on sale in the UK in October.

The airbumps can be customised in four contrast colours (black, grey, dune and chocolate) and there are 10 exterior paint choices.

The front seats use a bench arrangement with individual squab adjustment for legislative and comfort reasons.

Citroen has opted for an all-digital interface on the dash and has put the passenger airbag to the roof, deploying it over the windscreen, rather than positioning it in the dashboard. This has created more space for passengers and storage in the cabin.

In the rear, passenger legroom is similar to that of the Citroën C4. The new model has a boot capacity of 358-litres.

Citroen is also intending to offer payment plans for the C4 Cactus based around monthly payments but has not confirmed specific details for the UK.

Citroen will be adopting a similar approach to mobile phone price plans, with a range of funding options in the form of a monthly flat-rate or mileage-based payment.

The service covers all expenditure, excluding fuel, during the period of the agreement: finance, insurance and servicing. For a fixed monthly payment, customers can select their preferred trim level (equipment, engine, etc.) and the level of service they require (type of cover, all-in or mileage based, etc.) without exceeding their budget.

Citroen has not confirmed the full line-up of engines, but there will be a petrol engine available emitting less than 100g/km of CO2and a diesel version emitting 82g/km with fuel consumption of 91.1mpg.