IMI identifies up to 300% return on investment in apprenticeships 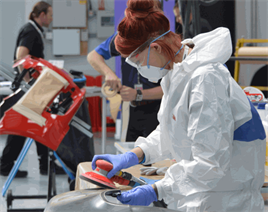 The automotive sector is being encouraged to overcome any doubts about employing young people and to future proof businesses by hiring apprentices after research that shows they can generate between 150% and 300% return on investment.

For every pound invested the business nets between £1.50 and £3.

And apprentices who start with no experience typically generate profit within 18 to 24 months – much earlier than was previously assumed.

Co-funded by the UK Commission for Employment and Skills, the research by the Institute of the Motor Industry is the result of a two year project to ascertain the level of return on investment of, and make the economic case for apprenticeships.

The study looked at a cross section of businesses from small independents to franchise dealers across the whole of the UK and involved 30 apprentices.

The productivity of an apprentice was found to follow an ‘S-curve’, showing low skilled, low level growth in the first year accelerating through the second year and delivering the same return as an experienced technician by the third or fourth year.

Steve Nash, the IMI’s chief executive, said: “Businesses must overcome their doubts about employing young people and invest in the future if our industry is to succeed as a whole.

"Overwhelmingly, the results from our recent study have shown that there is a clear financial return to the business within the apprenticeship, but the attitude and support of the employer to the apprentice is critically important.

"By giving a young person opportunities to apply their skills they will ultimately become better and more productive technicians much earlier than commonly perceived.”

There were five key benefits identified in the study:

• The IMI S-curves show that, by the end of the third year of an apprenticeship, for a £50 hourly charge out rate, an apprentice can generate between 150% and 300% return on investment  – this means that for every £1 invested, against apprentice expenses, the business nets between £1.50 and £3.00

• Apprentices typically generate profit within 18 – 24 months – this is based on an apprentice who has no experience and is essentially non productive at the start.  If an apprentice has some experience, and is able to be productive from the start, they can pay their way much sooner – often in the first few quarters of the apprenticeship

• Apprentices learn company best practice and culture from the start – helping to ensure a better fit with the team and internal processes.