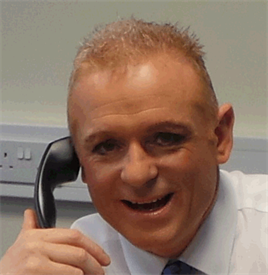 A Cancer Research UK campaign has prompted women to post make-up less faces on the likes of Facebook and Twitter (#nomakeupselfie)  has raised thousands of pounds, but it has also been met with a unmasculine response from men.

They have been posting pictures of themselves in fully made-up - amongst them the dealer group director.

Smyth was being ‘made-up’ to raise money for the charity.

He said: “It seemed a bit unfair, the campaign meant only the girls could take part; I decided if they were brave enough to dare to bare, then I should make the effort and go the other way.

“People have commented that I look scarily comfortable with the ‘glammed-up’ look, but to be truthful I don’t mind what anyone says! It’s for a great cause and the girls and I had a ball.”

To donate to Swansway’s no make-up selfie Cancer Research efforts go to www.justgiving.com/Swansway-Group.