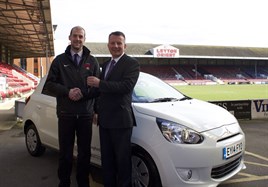 North City Autos Mitsubishi in Chingford has handed over a Mitsubishi Mirage for the League One football club Leyton Orient FC to use as part of a promotion.

And the dealership has pledged to offer special deals to any fans with an Orient season ticket as well as their staff and players.

In return the dealership’s advertising will be seen around the Brisbane Road ground and on televised games and feature in match day programmes.

Colin Heap (pictured right), dealer principal at North City Autos, joined the company earlier this year and is backing the club as part of a bid to reach out to more local businesses.

He said: “North City Autos has been a Mitsubishi dealer for nearly 30 years and we see ourselves very much as part of the community. We’re proud of our long history in the motor trade and Leyton Orient is our local club with a proud history themselves.

"This partnership will be good for both sides and we look forward to supplying them with more vehicles in the years to come.”

Tom Jeffes, commercial manager at Leyton Orient FC, said: “The great thing about this partnership is that it benefits our fans, as well as the club, because moving forward there will be extra discounts for supporters to buy their car from a local business which is great for them.”