Almost half (45%) of British consumers plan to buy a new or used car in the next two years, driven by affordability in the market.

The study by Nielsen, the global information provider, of 30,000 consumers across 60 countries showed that surprisingly, 83% in the UK want to change their car in the next two years due to needing access to a car, followed by being able to afford to upgrade (81%).

Among UK first-time buyers, being able to afford a car (92%) is the biggest reason, followed by wanting to have access to a car (both 67%). But almost four-in-ten (37%) say it’s because they’re embarrassed not to have one – a bigger issue for Britons than for Europeans in general (29%).

But not all people want a car. The biggest reason why UK consumers say they don’t have a car is because they’re ‘more hassle than their worth’ (60%), followed by a preference for other forms of transport (58%) and not being able to afford one (51%).

According to Nielsen’s Media Consumption Survey (2012-2013), online advertising is cited by 30% of British consumers as being “very helpful” when considering the purchase of a new car, ahead of television (24%) and magazines (17%). Newspapers are cited by 14% of Britons, mobile advertising by 12% and radio by 10%.

Eleni Nicholas, Nielsen senior vice president for automotive in Europe, said: “The car industry has a terrific opportunity if marketers can identify and reach potential buyers in the most conducive environments.

“Online advertising is seen as the most helpful platform, but there are various ways of reaching new buyers online. While ‘owned’ assets such as car brands’ websites are considered the most helpful, social media sites are also a vital decision-making tool for a significant number of potential customers.” 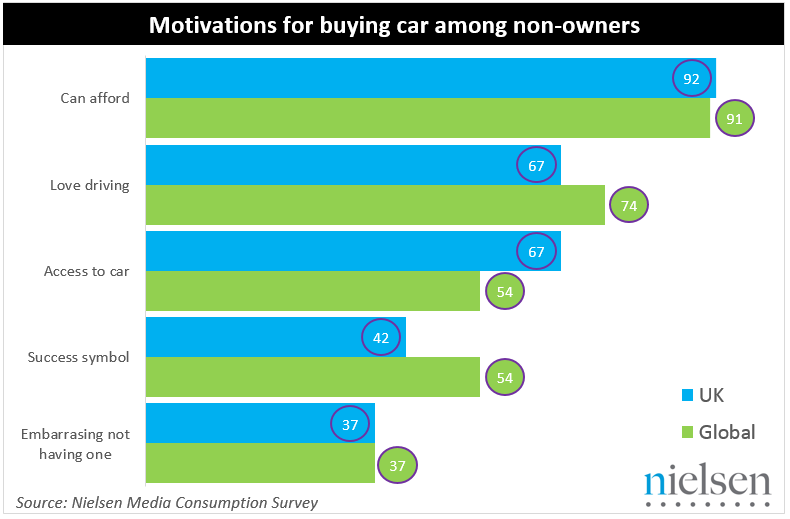