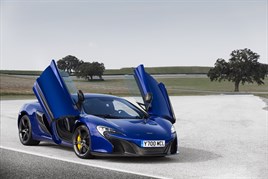 Park’s Motor Group has added the McLaren supercar franchise in Glasgow to become the brand’s fourth retail location in the UK.

Park’s is building a purpose built showroom for McLaren which will be completed by the end of the year. The opening is planned for December. The business will operate out of a temporary facility for sales and aftersales from the end of May.

The Glasgow dealership joins sites in London, Birmingham and Manchester and will sell McLaren’s range of supercars, including the new 650S Coupe and 650S Spider.

David Brimson, European director for McLaren Automotive, said: “The addition of McLaren Glasgow to the retail network is another key step in our growth plan in Europe.

“Park’s Motor Group is joining us with strong knowledge and experience and is a leading name in the luxury cars market.”