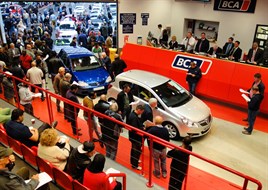 BCA’s latest Pulse report shows that the headline average car values increased in March, rising by £57 compared to February to record the highest monthly value this year and the third highest on record.

There were sizeable value rises to record levels in the fleet & lease and dealer sectors, while nearly-new values improved for the first time this year.

CAP Clean performance was up on a year ago by half a point.

Simon Henstock, BCA’s UK operations director, said: "Despite volumes remaining significantly higher than we have seen in recent months, demand was very strong across the range of stock on offer at BCA in March.

"We saw greater volumes from dealer part-exchange sources and a small increase in fleet/lease volumes.  This shift in the model mix meant the headline figure could have been even higher as the individual product sectors saw quite significant value uplifts."

He continued: “As we said last month, used car demand remains very strong, particularly for retail quality vehicles.  But as Easter approaches, the market is showing early signs of softening and, with the March new registration figures being the highest in a decade, this will generate more volume into the used car arena.

"If supply starts to outstrip demand, there will inevitably be some downward pressure on average values, particularly for less attractive or poorly presented vehicles.”

He added: “Sellers should keep close to the market and work with their remarketing partner to ensure their vehicles are sensibly appraised and realistically valued to sell first time.”

Nearly new values improved for the first time this year, rising to £20,315, a small increase of £29 over February.  Volumes remain very low and model mix remains the most significant price factor.  CAP remained static at just over 100%.