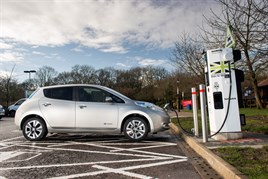 The head of the Office for Low Emission Vehicles (OLEV) has hit back at electric vehicle (EV) sceptics with suggestions that public opinion on the technology is shifting.

The Department for Transport has reported that as of March 31, 8,724 claims had been made through the Plug-in Car Grant scheme. Almost a quarter of those claims (2,025) were made in the first three months of this year, despite the scheme running since 2010.

Richard Bruce, head of OLEV, told AM sister title Fleet News: “The tide is turning. We gave out 600% more in subsidies for new cars in January 2014 than we did in January 2013.”

At the start of the current parliament, OLEV received £400 million to support the move to ultra-low emission vehicles (ULEVs). But the policy came in for criticism after ministers admitted that only half the available subsidies for plug-in vehicles were likely to be claimed by motorists.

However, Bruce said: “This isn’t a failed policy. In fact, it’s just a long-term policy and one whose importance has been recognised in the recent spending review.”

“Initial projections and budgeting were based on the car companies’ estimates of how many units they would sell, which turned out to be wildly optimistic,” said Bruce.

“There are other issues as well. For the first few years very few cars were available.

“If you wanted to buy an estate to fit the dogs in the back or a sports utility vehicle, you had to buy a petrol or diesel car. That’s now changing, with manufacturers bringing a wider range of vehicles to market.”