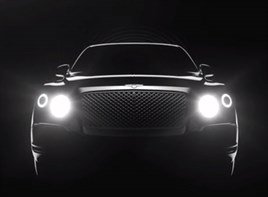 Bentley has shown glimpses of its new SUV in a teaser video.

The luxury brand confirmed production for its new SUV in July. The new model will be essential to unlock potential growth for Bentley in markets like China and Russia.

Bentley revealed an SUV concept at the Geneva Motor Show in 2012 which prompted negative reactions from the world’s press and prompted a rethink from the luxury brand’s design team.

Bentley says its planned SUV would establish a new market segment, with a starting price that matches the most expensive Range Rover or Porsche Cayenne.

No name has been chosen for the car yet, and Bentley does not have a heritage in SUVs to fall back on as it has with its saloons and coupés.

Bentley will be one of the first super-luxury SUVs which will be available for sale as other luxury brands like Lamborghini and Rolls-Royce all look to launch rivals to go on sale in China and Russia.