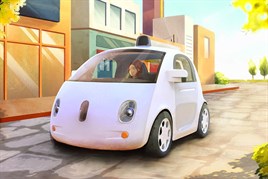 Google has offered test drives of its self-driving two-seater prototype city car to members of the public for the first time.

Google will roll out a research phase test drive of 100 prototype vehicles this year and is expecting to expand its pilot in California before 2017.

The self-driving car has a maximum speed of 25mph and does not come with a steering wheel. The car is fitted with sensors and an advanced computer system which can steer and control speed. Basic equipment on the prototype also includes a screen to display the mapping. The car starts driving with the push of a button.

“You can take a trip downtown at lunchtime without a 20-minute buffer to find parking. The elderly can keep their freedom even if they can’t keep their car keys. And drunk and distracted driving? History.”

Urmson said the first prototype vehicles will be very basic with Google hoping to learn as much from them as quickly as possible through the testing phase.

He said: “These prototypes have sensors that remove blind spots, and they can detect objects out to a distance of more than two football fields in all directions, which is especially helpful on busy streets with lots of intersections.

“On the inside, we’ve designed for learning, not luxury, so we’re light on creature comforts, but we’ll have two seats (with seatbelts), a space for passengers’ belongings, buttons to start and stop, and a screen that shows the route—and that’s about it.

“If the technology develops as we hope, we’ll work with partners to bring this technology into the world safely.”

So this could mean Google will sell its self-driving technology to other established car manufacturers in the future? Is a self-driving car future inevitable?